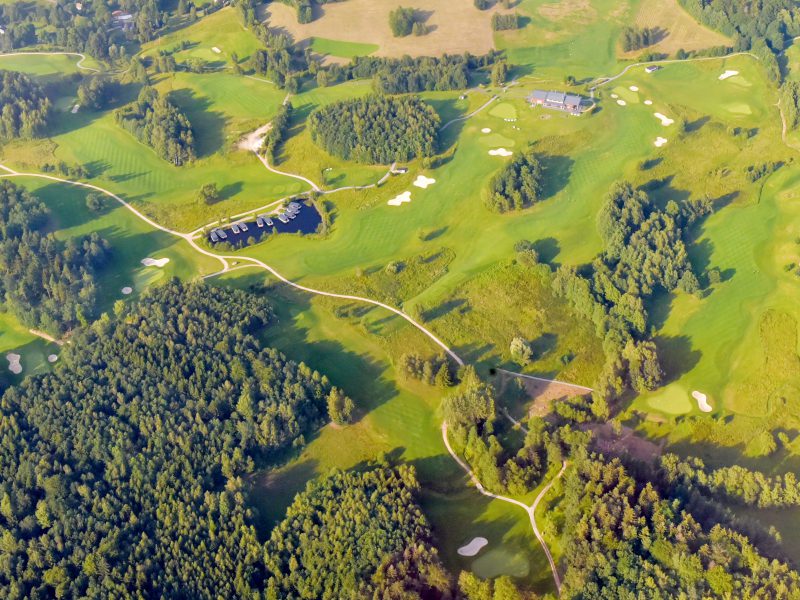 The golf course Ypsilon Golf Liberec is situated at 420 – 470 metres above sea level, and it is placed in beautiful countryside with no civilisation rush nearby the Fojtka Dam near Liberec. The golf course spreads on land plots with an acreage of 102 ha, 37 of which consist of the actual playing grounds. The local broken relief allowed Keith Preston, an English architect, to create 18 specific holes with an overall length of the course exceeding six thousand metres (6102 m – master male driving ranges) with the course par being 72.

The course consists of 4 three-par, 4 five-par, and 10 four-par holes. Each of the eighteen holes contributes with its specific character to the overall remarkable experience from playing at this course.

Regarding the 3-par holes, the “forest hole” (hole No. 6) is worth mentioning, for example, despite being rather short, thanks to its broken and deep green (30 m) surrounded closely by the forest. Moreover, this green is protected from the front by 2 bunkers.

The 5-par holes will all require a careful consideration of the playing strategy, especially regarding the first two shots. The average length of these holes is 460 m.

The Ypsilon Golf Course has won the “Best course for 2006 and 2007” award, the “Best services for 2008” award, the second place in the “Best course for 2015”and third place in the “Best course for 2016” award in the readers inquiry of the golf magazine Golf Digest C&S. In 2017, we received the award from the American Golf Digest magazine and ranked among the top 8 resorts in continental Europe. In 2014, we were included in TOP 5 golf courses in the Czech Republic by the portal golfova-hriste.cz. In the inquiry organized by the Everywhere-players, i.e. the players who played at more than sixty golf courses in the Czech Republic during a single calendar year, we placed 2nd in 2014, then we WON THE FIRST PLACE in 2015, 2016 and 2017.