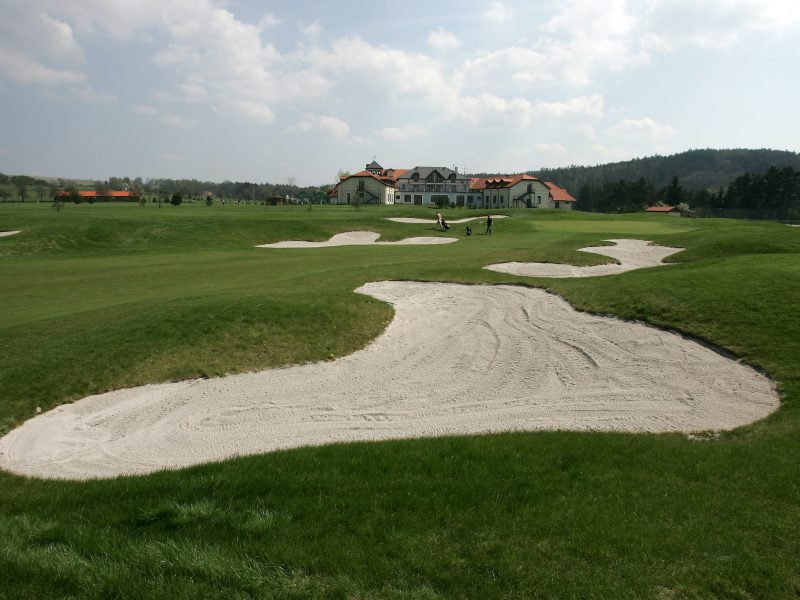 The entire area of ​​the Darovanský dvůr golf resort was created by an extensive reconstruction of a former farm, originally a plow yard from the 17th century. The golf course was established by gradual construction in individual stages since 1997, is located on large plots above the meander of the Berounka River and is known for its panoramic views of the surrounding forests. Mr. Kamil Pilát contributed to the initial implementation of the project, but the final design and face of the course were imprinted by the Scottish architect Chris Johnson.

First, a 300-meter-long driving range, practice areas and, in particular, 9 holes of a public course for beginners were built in 1997. This was followed in 2001 by the completion of the first 9 holes of the Master Course, which was expanded to 18 holes in the spring of 2002. In 2004, it was further expanded by a very picturesque part – 9 holes of the Jezírek course. The entire 27-hole course is very sensitively set in the surrounding landscape of the Horní Berounka Nature Park.

Due to its character, it is a course in a combination of park and links type. During the years 2004 – 2009, further modifications were made to the design of the original eighteen holes, demanding modeling of greens, tracks and construction of many large bunkers took place. The whole course is of medium sports difficulty, but it is also a sufficient challenge for racing players.

In the heart of the golf course is a complex of several hotel buildings Congress & Golf Hotel Darovanský dvůr. The extraordinarily wide and high-quality services of the hotel provide a unique background for the rich golf life in Darovanský dvůr.